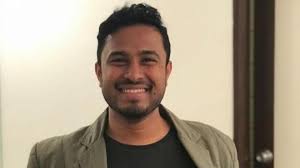 Abish Mathew was born on 28-02-1987 in Noida, Uttar Pradesh, India. He is an Indian comedian, motivator and YouTube star.