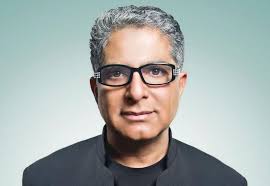 Deepak Chopra is one of the leading mind-body-spirit gurus. He wants to convey the benefits of incorporating meditation and a healthy lifestyle to increase inner happiness.

Deepak Chopra was born in 1947 in New Delhi, India. He attended the All India Institute of Medical Sciences and studied Western medicine. In 1968 he came to America and started working in a hospital in New Jersey. This led to a successful medical career, where he became Chief of Staff at New England Memorial Hospital. He also built a growing private doctor’s office. During that time, Deepak Chopra said he smoked a pack of cigarettes every day and also drank a lot to calm his nerves. He became increasingly uncomfortable with his attitude to life and became aware of the limitations of Western medicine. He felt that something was missing in his approach to medical care. For this reason, he became increasingly interested in Ayurvedic medicine, which emphasizes a more holistic approach to medical care.