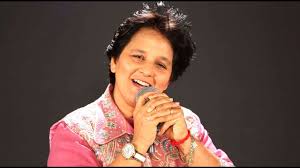 Falguni Pathak (born March 12, 1964 in Mumbai) is an Indian singer, performing artist and composer. Their music is based on traditional forms of music from the Indian state of Gujarat. Since her professional debut in 1997, she has developed into an artist with a large fan base across India. When asked how she decided to pursue a career as a singer, she replied that this was done by default. [3] She is widely regarded as an Indian Madonna.