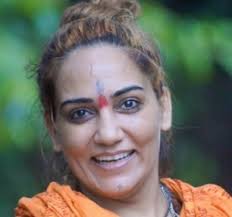 Shivani was born in 1975 (43 years; age 2018) in Noida, Uttar Pradesh, India. She is an all-rounder because she is a singer, author, Wicca, Tantrika, clairvoyant, healer, Vodou anthropologist and spirit hunter. She is called Singh Vahini, which means lion rider Durga. Shivani Durgah is a famous occultist, goddess and author. In 2017, she joined the popular reality show Bigg Boss 11 as an ordinary candidate.