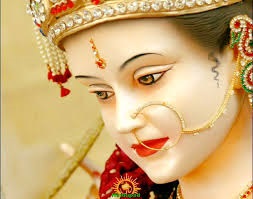 Chaitra Navratri is nine days festivity which starts on the first day of the first month of Hindu lunar calendar, Chaitra. It is observed during the Shukla Paksha (Waxing phase of moon) and falls in the month of March or April. It is also known as:

All nine days of Navratri are dedicated to manifestation of Maa Durga in nine different forms (Nav Durga).

The initial 3 days are dedicated to Maa Durga, the Goddess of power and energy.

On the first day of the Navaratras, barley (Jau in Hindi) seeds are sown on a small bed of mud and kept in the puja room.

The next 3 days, Maa Lakshmi, the Goddess of peace and prosperity is worshipped.

The final days are devoted to Maa Saraswati, the Goddess of wisdom and knowledge is worshiped to acquire the spiritual knowledge. This in turn will free us from all earthly bondage.

On the 8th and 9th day of this festival, yagna (sacrifice offered to the holy fire) is performed to honor Maa Durga and bid her farewell. In North Indian regions, Kanya Puja is performed on either of these 2 days in which Nine young girls (those who have not reached at the puberty stage) symbolizing the nine forms of Maa Durga are worshiped with a young boy who repersents Bhairav, who is considered as protector against all evils.

Peoples who worship Goddess Durga with a pure heart, honesty and without any desire receive her blessings as happiness, peace and freedom from all bondages.

In North India, the Navratri is celebrated by fasting on all nine days and worshiping the       Goddess Durga in her different forms. Peoples perform Puja at home, visit temples for the darshan of Maa Durga, organize a jagraata (keeping awake whole night by singing devotional songs dedicated to the Maa Durga). On the eighth day or Ashtami, the fast is broken by organizing a bhandara or kanya pujan.

The pot in which seeds are sown on first day is watered and worshiped throughout the nine days and is known as Khetri.By the tenth day, each seed has sprouted into a shoot (3-5 inches long). These shoots are plucked after the pooja. This Khetri (shoots) is either given to the attendees as a blessing from God or submerged in the river.

The holy festival of Navaratri is celebrated for the victory of good over evil.