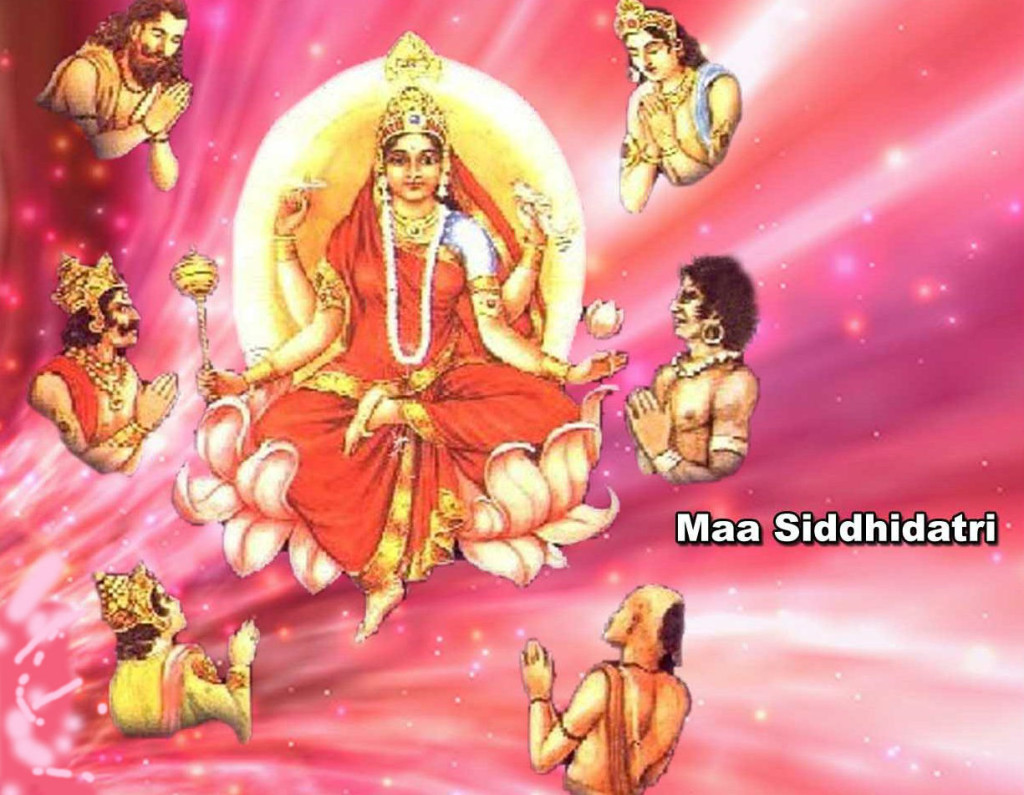 Origin – Siddhidatri (“Siddhi” means “Perfection” and “Datri” means “Giver’) means the one who gives perfections and achievements to her devotees.It is believed that, Lord Shiva worshipped Adi-Shakti for creation of the Universe. Then the supreme Goddess of Power, Adi-Shakti, appeared in the form of Goddess Siddhidatri from the left half of Lord Shiva. Thus the universe is created by the union of Man (Lord Shiva) and Nature (Adi-Shakti).

Goddess Siddhidatri is also known as Goddess Laxmi, which means she is the symbol of wealth, success and happiness.

Navratri Day of Worship – Goddess Siddhidatri is worshipped on the ninth day (last day) of Navratri.

Idol – The appearance of Goddess Siddhidatri is divine and heavenly and she is always in a very graceful, pleasant, charming pose. Goddess Siddhidatri sits on Lotus (Kamal) Flower and rides on the lion. She is depicted with four hands- Gada and Chakra in her two right hands while lotus flower and Shankh (Conch) in the two left hands which signify that she is always ready to help us.

Details – Goddess Siddhidatri is the supreme form of Adi Shakti or the ‘female goddess’ who is worshiped by all gods and possesses all type of ‘Siddhis (Achievements or supernatural powers)’which she bestows to her devotees.

According to Legend ‘Devi Bhagvata Purana’, Lord Shiva got all these ‘siddhis’ by worshiping Adi Shakti. By her blessings his left half became female and right half is male. Thus Lord Shiva got the title of “Ardha-Narishwar” as Goddess Siddhidatri appeared from his left half.

There are eight Siddhis according to the Markandaye Purana:-

She is worshipped by Dev (Gods), Danav/Asura (Demons), Gandharva, Kinnar (Beast), Yaksh (Demigods), Siddha, Manav (Human). Thus she is surrounded by all 8 of them. The Siddhi means to understand that everything is Supreme Being or Brahman. If a “sadhaka” (Devotee) worships with his full faith and devotion, he acquires all “Siddhis” and he can achieve anything from the universe.She also grants 26 different wishes to her Bhaktas/ Devotees.