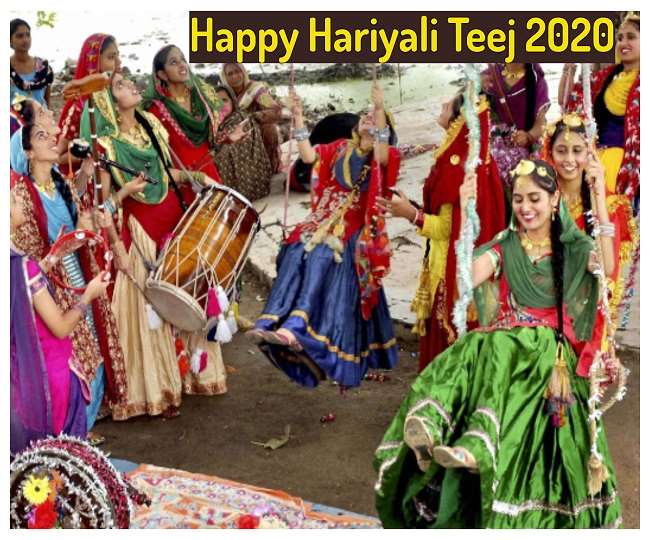 Women across the country are celebrating the Hariyali Teej 2020 festival today to mark the start of the monsoon and to appreciate the abundance of greenery in nature that rain brings during the Sawan or Shravan month.

The Hariyali Teej 2020 is an important festival in Hindu culture, as Hindu belief that Lord Shiva agreed to marry the goddess Parvati that day. Therefore, the day is considered sacred because it marks the union of Shiva and Parvati. The Hariyali Teej is one of the three Teejs that are celebrated across the country. The other two are Kajari Teej and Hartalika Teej. Hariyali Teej is also known as Sindhara Teej or Shravan Teej because it falls in the month of Shravan.

The devotees, mostly women, offer prayers to the goddess Parvati to protect their husbands from mishaps and to pray for their long lives. Women across the country are celebrating Hariyali Teej 2020 by singing, wearing colorful clothes, dancing and putting mehendi on their hands.

The Tritiya Tithi (third day) in the month of Shravan, Shukla Paksha (growing phase of the moon), is considered favorable because it is believed that Lord Shiva had blessed the goddess Parvati on that day, and has since chosen him as her husband it is considered the day of their union with Lord Shiva.

On this day, unmarried girls pray for a husband of their choice, while the married women seek well-being and a long life for their husbands and also want to be Atal Suhaagan (blessed forever).

History of Hariyali Teej 2020:Hariyali Teej is the name of this festival to mark the importance of nature and green that we experience after the monsoon rain. The festival symbolizes the wealth and contentment of a happily married life. The woman offers the goddess Parvati prayers for the long life of her husbands on this day. Women also pray to Lord Shiva in the form of a song and ask for a husband so that they can properly celebrate the Teej event with their in-laws. Ghewar, coconut laddoos, Sabudana Kheer and Aloo Halwa are some of the sweets that are prepared and consumed during this festival.