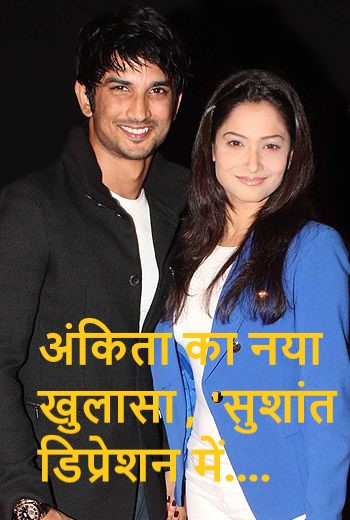 Actor Ankita Lokhande, who has been with Sushant Singh Rajput for nearly seven years, has revealed why she didn’t attend his funeral after allegedly suicide at his Mumbai residence in mid-June. In an exclusive interview, the manicarnica actor said she didn’t go to his funeral because she couldn’t see him in this condition.

“I didn’t go to his funeral because I couldn’t see him like that,” she said to her Interview .Many of his former co-stars attended the funeral of Sushant Singh Rajput, including Kriti Sanon, Shraddha Kapoor, Vivek Oberoi, Ranvir Shorey, Rajkummar Rao and director Abhishek Kapoor, as well as the politician Sanjay Nirupam.

“He wasn’t a man who could take that step. Sushant wasn’t the guy who could commit suicide. We saw worse situations when we were together. He was a happy-go-lucky guy.”

Before his Bollywood debut with Kai Po Che! In 2013 Sushant was a TV star courtesy of his successful daily soap Pavitra Rishta, which aired from 2009 to 2014. The actor was with Lokhande on the show and the two even had a long-term relationship. They separated in 2016 after being together for 7 years.

Ankita Lokhande spoke to her Interview “The nation wants to know” and repeatedly said that Sushant was not a depressed type.

“Sushant may be upset, scared, yes, but depression is a big word. Calling someone “bipolar” is a big deal. He came from a small town. He established himself independently. Everyone writes their own account of how “depressed” they were. It hurts to read it all, “she said.

Ankita Lokhande also revealed that Sushant was so high-spirited that he was willing to work in short films if his films were unsuccessful. He would always make plans for his life. And a decision like suicide is hard to believe, she said.

Meanwhile, the Bihar police reached Ankita Lokhande’s apartment in Malad, Mumbai on Thursday to record her testimony about the death of actor Sushant Singh. Ankita was interrogated by the police in Bihar for an hour, according to sources.

Rhea Chakraborty, who had been Sushant’s girlfriend for one year until his death and is now named as a defendant in the FIR filed by Sushant’s father, has petitioned the transfer of the case to Mumbai to the Supreme Court. She will likely move to an urgent hearing on Friday.