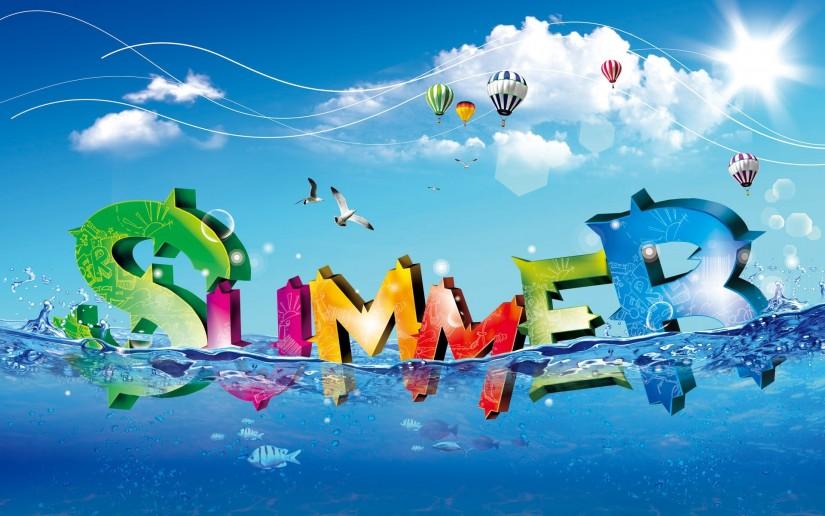 Summer is the warmest season of the year out of the four temperate seasons and falls between spring and autumn. The date of the beginning of summer varies according to climate, tradition and culture. In the Northern Hemisphere, summers is defined as the period between the summer solstice (the days are longest and the nights are shortest) i.e. June 21/22, and the autumnal (fall) equinox (day and night are equal in length) i.e. September 22/23 while in the Southern Hemisphere, summers falls between the winter solstice (the nights are longest and the days are shortest)  i.e. December 22/23 andthe spring (vernal) equinox(day and night are equal in length) i.e. March 20/21. When it is summer in the Southern Hemisphere it is winter in the Northern Hemisphere, and vice-versa.

In India, the summer season starts in the month of April (sometimes from March) and continues till the end of June. During these months, the rays of the sun are nearly vertical. The days are long as compared to nights. Summer burns almost all the parts of India with sweltering heat.The heat is intolerable during the months of May and June.  June is the hottest month of the year in India when temperature crosses 45 degrees. The mid-day is the most terrible and unbearable part of the day. India is a tropical country. The Northern plains, very hot and loo (hot winds) blow which cause dust storms. The southern India is less hot because of the cool winds coming from the sea keep the temperatures low. The desert area of the north-western India is extremely hot and Dust storms occur every day. The mountains usually have a cool climate during the summers.

Water scarcity is common in India during summer. Peoples usually get tired very soon in day time and often affected by the sun-stroke. Dehydration occurs as body sweats heavily and if we do not take plenty of water. Excessive heat of summercan cause infections and ailments like Cholera and Diarrhea.

It is a very good season for outdoor activities like vacationing, going on hilly areas,traveling to the beach, swimming or simply laying on the beach. Water sports are getting popular in summer activities.Many tropical summer fruits like pineapples, watermelons, mangoes, berries, melons, and vegetables are abundant in summer.

Tips for protection in summer: