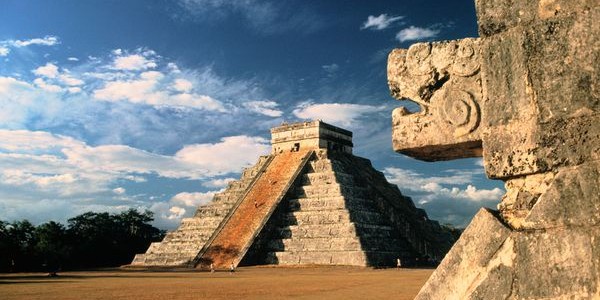 Chichén Itzá, the popular temple city of the Mayas, a pre-Columbian civilization that is currently located on the Yucatan Peninsula in Mexico, Central America. It was the economic, political and religious center of Maya civilization during the period from A.D. 750 to 1200.

Chichén Itzá, the popular temple city of the Mayas, a pre-Columbian civilization that is currently located on the Yucatan Peninsula in Mexico, Central America. It was the economic, political and religious center of Maya civilization during the period from A.D. 750 to 1200.

The pyramid of Kukulkan also known as El Castillo (pictured) lies at the heart of the city—79 feet (24 meters) high. The Castillo means castle in Spanish is the most famous image of Chichen Itza. There is a staircase of 91 steps on each of its four sides—one step for each day of the year, and the platform on the top represents the 365th step (depicting the solar year), 52 panels (for each week in the solar year) and 18 terraces (for the 18 months in the religious year). Inside, the Castillo is a temple accessible up a narrow stairway.

The name “Chichen Itza” means at the mouth of the well of the Itza. The Itza’s were ethnic groups that were settled in Yucatan before the Spanish defeat.

Chichen Itza was a large city built by the Maya people and is located in the eastern part of Yucatán state in Mexico. Between 900 and 1050 AD, Chichen Itza had become a powerful capital and also controlled northern and central Yucatan at the time. It covered five square kilometers.

Chichen Itza buit at the location of two large natural sink holes called cenotes nearby that would have provided plentiful water year-round, making it attractive for settlement. Of the two cenotes, the “Cenote Sagrado” or Sacred Cenote (also variously known as the Sacred Well or Well of Sacrifice), used as a place to sacrify objects and human beings as a form of worship to the Maya’s rain and lightning god Chaac. These sacrifices were done to end drought.

The people of Chichen Itza were very skilled craftsmen, including sculptors, weavers, jewelers and potters. There is a wide variety of architectural styles. Chichen Itza had diverse population and culture.

The people of Chichen Itza thrive for two centuries with the help of the strong allies built with regional tribes. Later due to civil war the power of Yucatan shifted to Mayapan, leaving Chichen Itza behind.

All the buildings at Chichen Itza are from stone. Some of the most famous buildings in Chichen Itza that have survived are: The Warrior’s Temple, El Castillo, and The Great Ball Court.

Chichen Itza is a UNESCO World Heritage Site since 1988.

It is the second most popular site for visitors to Mexico and can be visited by tourists and religious pilgrims. Approximately 1.2 million people visit the ruins of Chichen Itza every year but visitors are not allowed to climb the stairs of the Castillo in order to preserve the monument.