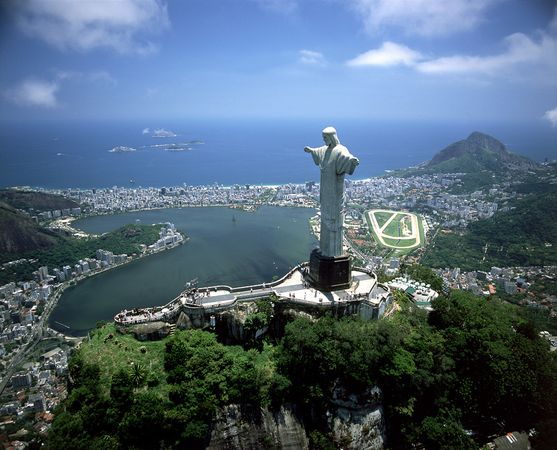 The “Christ the Redeemer” statue in Rio de Janeiro,Brazil, 105-foot-tall (38-meter-tall) atop the summit of Mount Corcovado high above Rio, took five years to build. It is build in France in 1931 by sculptor Paul Landowski and was shipped to Brazil in pieces, and then carried up the mountain by train, where it was reorganize. It is made of concrete and soapstone and its weights is approximately 700 tons. The statue with a hug-like wingspan appears to be like welcoming the visitors. This was designed by Heitor da Silva Costa and it cost around $250,000 which is mostly collected from donations. The statue has become icon for Rio and Brazil.

Facts about Christ the Redeemer, Rio de Janeiro
1. Emperor  Dom Pedro I, Brazil was the first one to order an expedition to the peak of the mountain in 1824. In 1882 his son, Emperor Dom Pedro II was the onw who inaugurated a 3,800 meter railway to the top of the mountain which still up and running today, and is the most unique way to ascend to the Christ the Redeemer statue.
2. The idea for the Statue of Christ the Redeemer was provided by Father Maria Boss. The statue was constructed in France because it was it was thought that there worked is not apable to built such master piece at that time and then It was transported, piece by piece, to Rio de Janeiro; the head alone is made up of 50 individual parts.
The statue has  height of 38 meters and was constructed from the head down, so that the head was completed first. In total, more than a thousand tons of concrete were used to build the statue.
3.When it was originally planed then it has Christ was holding a globe and a cross.