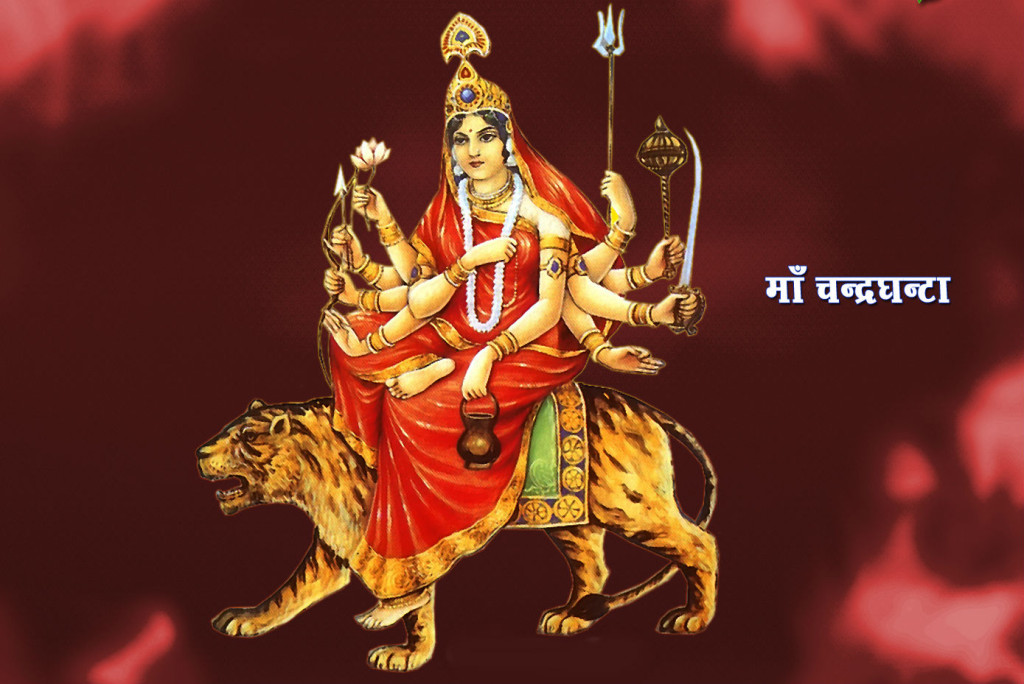 Navratri Day of Worship – Goddess Chandraghanta is worshipped on the Navratri’s third day.

Ruling Planet – It is believed that the planet Shukra (Venus) is ruled by Goddess Chandraghanta.

Idol – Goddess Chandraghanta wears the semi-circular moon (Chandra) on her forehead that appears like the bell (Ghanta) and for this reason she is known as Chandra-Ghanta. She has three eyes and ten hands in which she carries Trishul, Gada, Sword and Kamandal (A water vessel) in her four left hands and in her four right hands she holds lotus flower, Arrow, Dhanush and Japa Mala (Rudraksha beads) and keeps the fifth right hand in Varada Mudra (gestures of boon giving) and the fifth left hand in Abhaya Mudra (gestures of stopping harm). She is charming, has a golden bright complexion.  She mounts on the tigress and her roaring voice showing intense anger and violence is enough for terrifying demons.

Details – Chandra and Ghanta, meaning supreme bliss and knowledge, showering peace and serenity, like cool breeze in a moonlit night and brings and prosperity in life. The sound of the moon-bell on her forehead believes to remove all type of spirits away from her devotees.

She always looks ready to go in the battlefield to fight against demons with all her weapons in hand and possesses bravery and great strength while her face looks calm and soothing.

Those who Worship Goddess Chandraghanta on third day of Navratri, feel strong, brave and courageous, calm and humble which helps get rid of their sorrow and pain.

She is mainly worshipped in Tamil Nadu