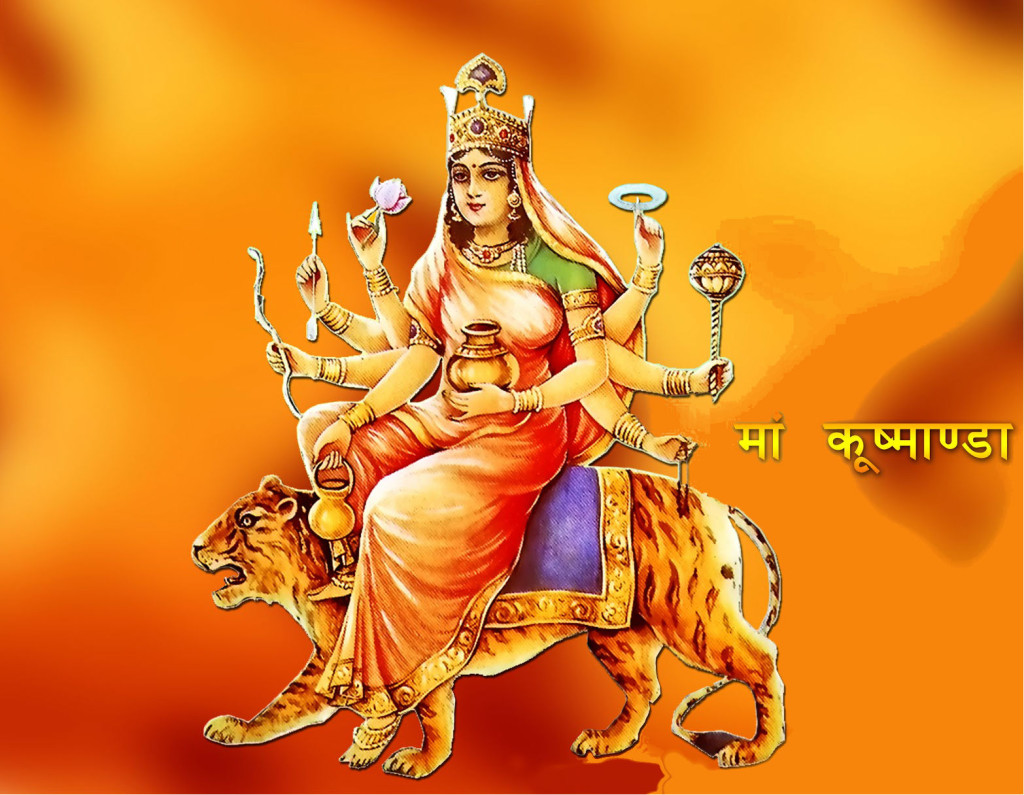 Origin – Goddess Parvati started living inside the center of the Sun so that she can release energy to the universe and therefore Goddess is known as Kushmanda (‘Ku’ means ‘a little’; ‘ushma’ means ‘warmth’; ‘anda’ means ‘the cosmic egg’). The glow and radiance of her body is as luminous as that of the Sun. She is considered as the creator of the universe- Brahmanda (??????????) as she created the whole universe as a ‘little cosmic egg’ with her divine smile when there was nothing except darkness. In this way all the directions get illuminated by her divine smile including the Sun itself.

Ruling Planet – Goddess Kushmanda rules the God Sun and provides direction and energy to the Sun.

Idol – Goddess Kushmanda rides on the lioness which represents ‘Dharma’. She has eight hands (Ashtabhuja Devi) and holds Kamandal, Dhanush, arrow and Kamal in the right hands and Amrit Kalash, Jap Mala, Gada and Chakra in the left hands in that order. Her Jap Mala (Rosary) has all the eight Siddhis and nine Niddhis.

Details – She also likes Bali (Sacrifice) of white pumpkin known as Kushmanda (?????????). Thus she is popularly called as Goddess Kushmanda because of her association with Brahmanda (Universe) and Kushmanda (White Pumpkin).

Bhimaparvat is known to be the abode of Goddess Kushmanda.

The one who worships Maa Kushmanda on the fourth day of Navratri; he/she is blessed with inner strength, good health, fame and prosperity.