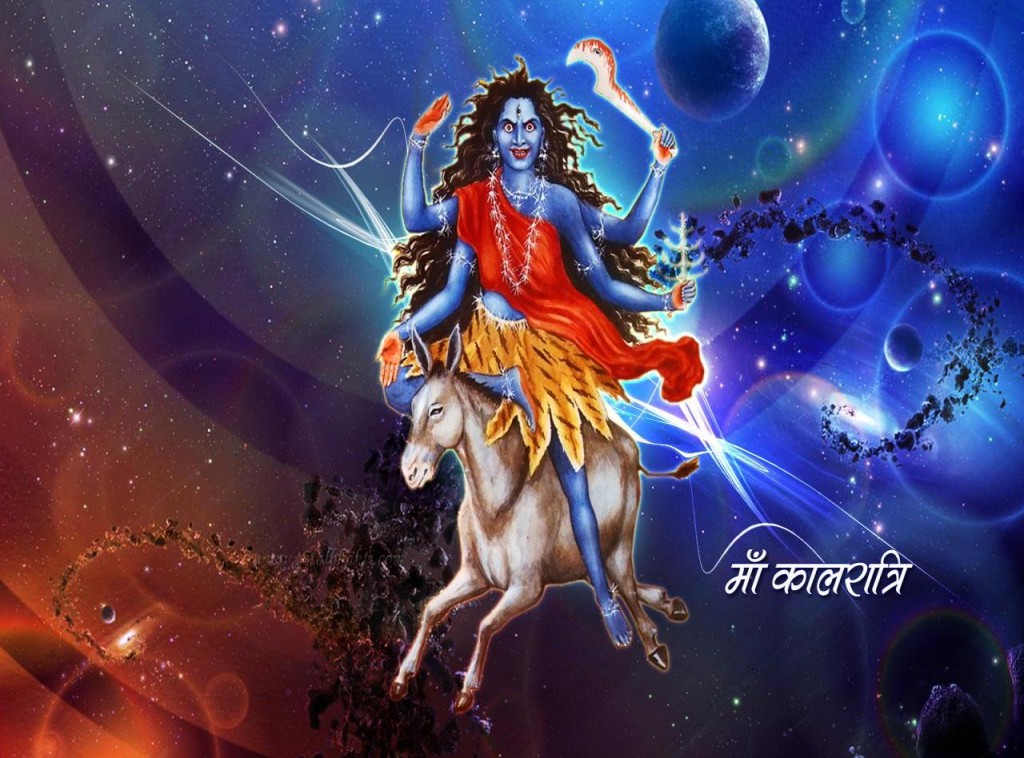 Origin – In Skand Purana, when the Goddess Parvati removed outer golden skin and becomes dark complexioned to kill demons named Raktabeej, she was known as Goddess Kalaratri. She is the most ferocious form of Goddess Parvati.

Kaal Ratri (Kaal represents “time & death” and ratri means “night”) means the One who is “the Death of Kaal”.

Navratri Day of Worship – This is the seventh manifestation of Maa Durga and is worshipped on the seventh day of Navaratri.

Ruling Planet – The planet Shani is ruled by Goddess Kalaratri.

Idol – Goddess complexion is dark black like night that is why called Kalaratri.  She rides on a faithful donkey and hasfour hands. Her right hands are in Abhaya (protecting) and Varada (giving) Mudra while in left hands she carries sparkling sword and the deadly iron hook. She has fearlessness posture, long open hair and a necklace that shines like thunder. The Goddess has three eyes that shine bright and flames emanate from her breath.

She blesses her devotees with Abhaya and Varada, removes all obstacles from their life and blesses them with all the happiness and joy in life.She is also known as Goddess Shubhankari (???????) because of her Shubh or auspicious power within her ferocious form.

Goddess Kalratri is the destroyer of darkness and ignorance. Kalratri represent the dark side of Mother Nature who takes a violent form to remove all negativities from the earth.

Various kinds of Tantrik rituals and certain special sacrifices are performed at midnight of this day to please the Goddess.