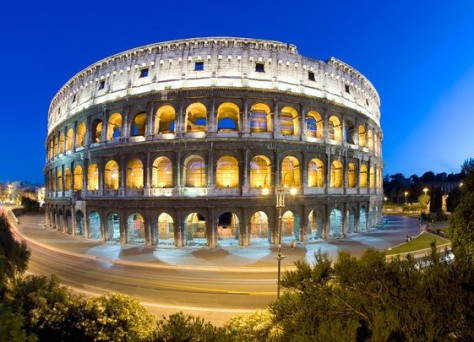 The Colosseum in Rome, Italy— Built in Rome around A.D. 70(2,000 years ago) under Emperor Vespasian was the first freestanding amphitheater. Once held up to 50,000 spectators who came to watch gory games involving gladiators contests, group combats, wild animals hunt, prisoners, battle reenactments, executions and other productions.Earthquakes and stone-robbers have destroyed the Colosseum, but sections of the structure remain open to tourists. Modern sports stadiums and amphitheaters still resemble the elliptical structure Colosseum’s famous design all over the world.

Few facts about The Colosseum, Rome:-

1)  The Coliseum in Rome has more then 80 entrances and can accommodate about 50,000 spectators.
2) The last gladiatorial fights was took place in 435 AD.

3) All Ancient Romans had got free entry to the Colosseum for events, and was fed throughout the show.

4)  Festivals or games could last up to 100 days in the Coliseum.

5)  The Ancient Romans would sometimes flood the Colosseum and also  have miniature ship naval battles inside as a way of entertainment.

6) The Colosseum in Italy only took i 9 years to build and using over 60,000 Jewish slaves.

7)  Many natural disasters damaged the structure of the Colosseum, but one og the major was the earthquakes of 847 AD and 1231 AD that caused most of the damage you see today.

8)  The original name of the Coliseum was (F. Amphitheater)Flavian Amphitheater, after the Flavian Dynasty of Emperors.

9)  Rome´s popular monument was built for 3 reasons. As a gift to the Roman Citizens from the Flavian Dynasty to increase their popularity, to stage various forms of entertainment, and also to showcase Roman engineering techniques to the world.

10)  It is thought that approx . 600,000 people lost their lives and also  over a million wild animals were killed throughout the duration of the Colosseum hosted games of people vs. beast