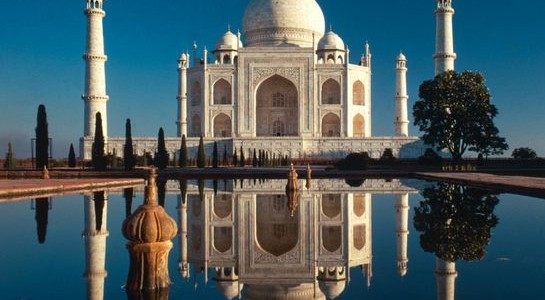 The Taj Mahal, in Agra, India, is the lavish mausoleum built in between 1632 and 1648 by 5th Mughal Emperor Shah Jahan to honor the memory of his beloved late wife, Mumtaz Mahal. It required more than 20,000 laborers to build this opulent, domed mausoleum which it includes four minarets, each more than 13 stories tall. This white marble structure combine’s number of architectural styles Indian, Persian, Turkish and Islamic and is considered the most perfect specimenof Mughal art and architecturein India.

The mausoleum is a part of a vast complex comprising of a main gateway, an elaborate garden of raised pathways, a guest house (to the right), a mosque (to the left), and many other palatial buildings. The Taj is at the farthest end of this complex behind the Jamuna River. The large garden contains sunken flower beds and four reflecting pools dividing it at the center.

After the completion of Taj Mahal, Shah Jahan spent the rest of his life gazing at the Taj Mahal from a window when he get dethroned and imprisoned by his son Aurangzeb in 1658.