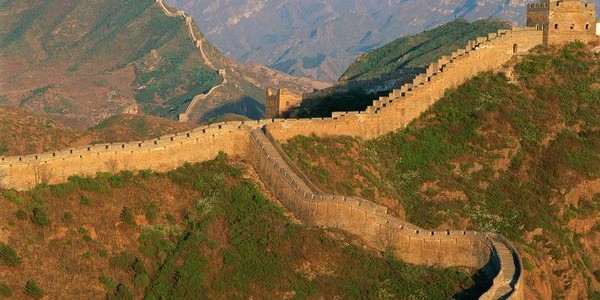 The Great Wall of China is the only man-made object visible from space.

This wall was built to protect China’s northern border from invading Huns, Mongols, and other tribes, and to unite fortifications into one defense system.  It is 4,160-mile and ranks as the world’s longest man-made structure. The barricade construction started in between the 5th century B.C. and the 16th centuryand took hundreds of years to build. It is not a single continuous structurebut actually made up of several separate structures that connect and branch out here and there. The best known section was built in between 220–206 B.C. by the first emperor of China, Qin Shi Huang Di.  The majorsections of the existing wall are from the Ming Dynasty.

History:
Excitement abounds regarding the vicissitude of the Wall of the Qin, Han, and Ming Dynasties.
The Great Wall of China was built originally in the Spring and Autumn, and Warring States Periods as a defensive fortification by the three states: Yan, Zhao and Qin. It went through constant number of  extensions and repairs in later dynasties. It was began as independent walls for different states when it was first built.It did not become the “Great” wall until the Emperor Qin Dynasty. Emperor Qin Shihuang successful effort to have the walls joined together to fend off the invasions from the Huns in the north. After then, the Wall has served as a monument of the Chinese nation throughout history.

Construction:
The mystery of wall construction is  amazing. Its construction, which drew heavily on the local resources for construction materials, was carried out in-line with the local conditions under the management of contract and responsibility system. is was built by  a great army of manpower, composed of soldiers, prisoners and local people.The construction result demonstrates the wisdom and tenacity of the Chinese people.

Culture:Great Wall carries a part of Chinese culture. It also has been long  incorporated into Chinese mythology and symbolism.