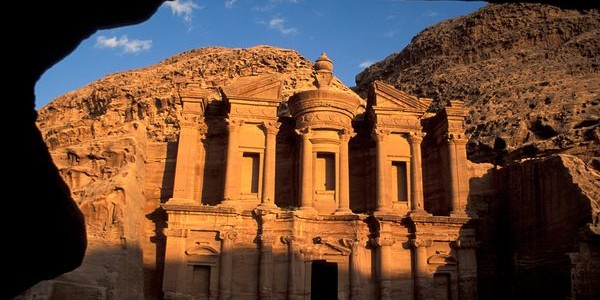 Petra was the capital of the Nabataean kingdom of King Aretas IV (9 B.C. to A.D. 40)  during the Roman Empire  and is perched on the edge of the Arabian Desert built around 9 B.C. Located in southwest Jordan are the ruins of the ancient city of Petra.

Petra means “rock” in Greek, is also known as “the city in the rock.”

The members of this civilization expert in manipulating water technology, constructing intricate tunnels and water chambers, ceramic pipes that create a pseudo-oasis. The ancient city includes the embellished tomb facades and monuments, a 4,000-seat amphitheater and the El-Deir monastery. Several incredible structures (Massive temples, tombs and monuments) carved into stone such as a 138-foot-tall (42-meter-tall) temple carved with classical facades into rose-colored rock. The Sik al-Khazneh, also known as the Treasury is the most beautiful Petra structure.

Petra was declared a World Heritage Site in 1985.

2.. Petra has so many amazing architecture The most popular is The Treasury. It is estimated to be over 2,000 years.

3. The Bedouin of the Arabian Desert has destroyed many priceless carvings on the Treasury’s walls. They used to do there shooting practice on carvings as target.

4. The structures on most of the Petra Archaeological site have been weakened by the salt that is blown from the dead sea and which crystalizes on the building’s columns.

5. Petra is though to have been built during the Byzantine Era of the 5th and 6th AD when Petra became an important Christian center.

6. Petra is popular for its 800 individual monuments that has  includes buildings, tombs, baths, funerary halls, temples, arched gateways, and colonnaded streets, that were mostly carved from the kaleidoscopic sandstone.

7.City was first established in 312 BC;and  making it one of the oldest metropolises in the world.

8. It is in Petra that King Aretas called for the arrest of the biblian Apostle Paul after he was converted into Christianity.

9. Petra is  evidence to Mankind that Middle East was after all the most influential region of the world in the Middle Ages.

Petra is a hidden gem that will take you through the history of Middle East. It easily rivals Jerusalem as a caretaker city of the Middle East history.