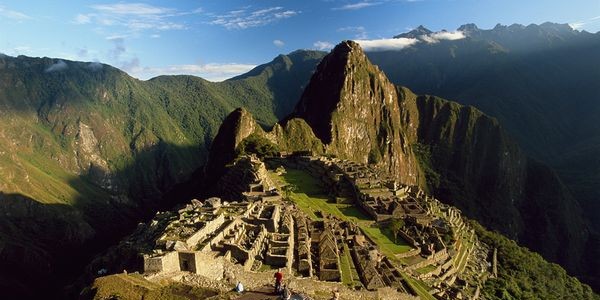 Machu Picchu is the city in the clouds. Built 8,000 feet above sea level in the 15th century by emperor Pachacutec, this ancient Incan city of sparkling granite is nestled between two peaks – Machu Picchu (Old Peak) and Huayna Picchu (New Peak) at an elevation of 7,710 feet. It was hidden amidst the lush forest and clouds for more than three centuries that’s why it is also called “the lost city of the Incas”. In 1911, Yale professor and archaeologistHiram Bingham rediscovered the city.

The excavation research suggests that the city was home to about 1,200 residents at its peak but it was abandoned after an epidemic of deadly smallpox introduced in the 1500s by invading Spanish forces.The ruined city is one of famous remnants of the Inca civilization. Today, Machu Picchu, located in Amazon region of Peru, Latin America is a key tourist attraction and the site can be reached by foot, train or helicopter.

Machu Picchu was constructed as a sorts of royal estate. Machu Picchu also has a number of structures that would have enhanced the spiritual significance of the site.

Machu Picchu did not survive the collapse of the Inca.

In the 16th century the Spanish comes in South America and also  plagues afflicting the Inca along with military campaigns  waged by conquistadors.In 1572 there was a fall of last Incan capital which causes the line of rulers came to end..Machu Picchuonce is a royal estate visited by great emperors, fell into ruin. Today, this site is on the ‘ list of World Heritage sites of United Nations.